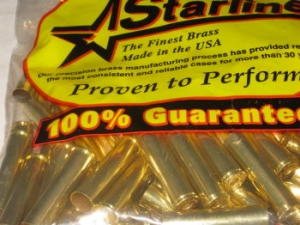 On July 28, 2003, Smith & Wesson and Cor-bon changed specification of primer pocket from large pistol to large rifle. Rifle primers are same diameter as pistol except they are approximately .006″ taller. This was done to prevent primer from being pierced by firing pin when loaded with max loads and heavy bullets (bullets over 400 grains). It was determined that hole in primer allowed pressure to damage firing pin and bushing, kind of like a cutting torch and the harder cup of a rifle primer will prevent occurrence. All cases sold by Starline, Inc. after July 28, 2003, will contain a large rifle primer pocket to accept a large rifle primer. Hodgdon Powder has generated load data which recommends using Win. Large Rifle Primers.