Hornady #3076 200 grain ELD-X was chosen to use in the Savage Model 110 chambered in 300 Winchester Magnum. The ELD is a long bullet (1.533) so when choosing load data care must be exercised because max loads for a Nosler Partition is not obtainable with the ELD line.

To illustrate below is the data from Hodgdonreloading.com for Retumbo powder, where two loads are listed for 200 grain bullets, the Partition and the Accubond.
The starting charge used on the Partition is 79.0 grains, max is 84.0 whaich is compressed

For the elk hunt accuracy was preferred over velocity so 73.0 grains was the charge weight, Prvi Partizan brass was selected (I like the close tolerance and longer life) and the primers are Federal #215. The rifle is zeroed at 200 yards.

The bull elk taken with this combination was estimated to be 450 yards, the bullet entered the left front shoulder (which was destroyed), and created massive organ damage. The bull traveled 50 yards after the shot. There was no exit wound therefore the elk absorbed all of the energy of the bullet. The estimated velocity at that range is 2205 fps. The top of the bulls back was the reference point used for aiming, the end result was a clean one shot kill 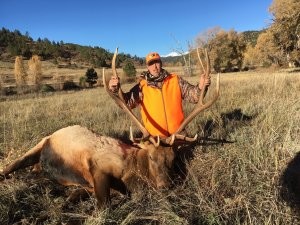